Free with Amazon Prime: Across the Winding River by Aimie K. Runyan

From Goodreads: “A woman unlocks the mystery of her father’s wartime past in a moving novel about secrets, sacrifice, and the power of love by the bestselling author of Daughters of the Night Sky.”

Across the Winding River is an historical fiction novel that centers on modern-day California with Beth and her elderly dad Max, and flashbacks to World War Two for two people, Max and Johanna, whose stories happen at different times during the European war. We know Max during World War Two is the same Max, but we’re not quite sure why Johanna’s story is being told until 33% through the book.  That’s when there’s a little “aha” moment and it all starts to make sense, but have no idea how or why the stories will eventually merge. The mystery urges the reader on to find out the answer. 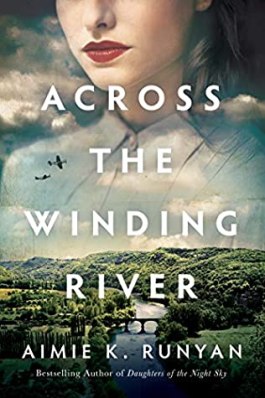 Sometimes when I read a historical fiction book that jumps from present day to the past and back again gets me annoyed because I’m really getting in to that particular part of the story, only to be put on hold when the story jumps to the other part. Some authors handle this successfully, and Runyan is one of them. Most of the chapters are short so you don’t get too involved in any one part of the story before reading the next part.

About 70% through Across the Winding River , part of the story is resolved, and I thought that was a little too convenient for my tastes. But the rest of the book delivered with satisfactory conclusions to the stories of Max, Beth, Johanna.

I do have to say this, though: the book title does not describe the book at all! I’m not sure what the publishers were thinking with that one.

I enjoyed this book so much I’m going to check out Runyan’s other work like Daughters of the Night Sky or Promised to the Crown. See all of Amie K. Runyan’s work by clicking here.

Across the Winding River is FREE this month to Amazon Prime members through their First Reads Kindle program. Every month Amazon offers up 6-7 books  that are new releases or soon to be released. Normally I don’t get a book although the offer is nice because the usual genres are not what I normally read. This month you can select TWO books to read for free with the First Reads program. Take a look at the titles here.

The other book I downloaded this month was Cleo McDougal Regrets Nothing by Allison Winn Scotch. Read my review here.

Across the Winding River is released to the general public on August 1, 2020.

For more of my book reviews, visit www.bargain-sleuth.com