The Lost Diary of M by Paul Wolfe

From Amazon.com: “An engrossing debut novel that cannily reimagines the extraordinary life and mysterious death of bohemian Georgetown socialite Mary Pinchot Meyer— secret lover of JFK, ex-wife of a CIA chief, sexual adventurer, LSD explorer and early feminist living by her own rules.”

I’ll admit it, I’ll read anything regarding the Kennedys. The family did a lot of good, did a lot of bad, and is still utterly fascinating 40 years after I picked up my first biography of John F. Kennedy.

The one thing I don’t like is conspiracy theories. There was a time when I devoured them and half-heartedly believed every one right after I read it; that was in my teens and early 20’s, about the time that Oliver Stone’s JFK hit the silver screen.  Then I grew up. I realized that there’s no way that many people involved in a conspiracy could keep a secret for 30, then 40, then 50 years.

But still, The Lost Diary of M by Paul Wolfe tantalized me.  I knew, from reading other JFK biographies, that Ben Bradlee’s sister-in-law had an affair with JFK. Knew she was murdered and her killer was never found. So many questions about her involvement with Kennedy and subsequent death is just itching for a historical novel. 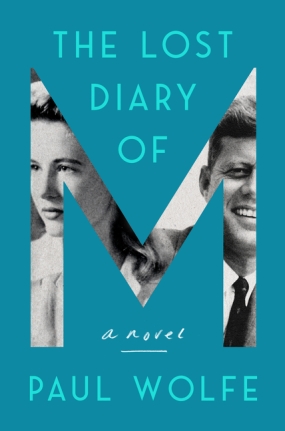 The book is set up like a diary.   And maybe that’s why it didn’t work for me. It was an interesting premise that falls flat. The author didn’t do anything to make me care about Mary Pinchot Meyer and found myself skimming diary entries until the next time Mary saw Jack. Unfortunately, their interactions weren’t that interesting, either.

The Lost Diary of M by Paul Wolfe is for die-hard Kennedy conspiracy theorists, but not for me.

For more of my book reviews, check out www.bargain-sleuth.com

Nancy's taking flying lessons and stumbles upon a couple of mysteries at the same time. This book was just weird, and weak in the mystery department. I break down #TheSkyPhantom #NancyDrewMysteries #53 by #CarolynKeene #NancyDrew #SeriesBooks #BookReview #GirlSleuth #GirlDetective #StratemeyerSyndicate #TeenSleuth #Bookstagram #ColdWar #Revolution #Flying #Flyinglessons #Teendetective #Booksta
He wrote the soundtrack to some of the biggest songs of the 1970's & 1980's, and now he's written a book about his life. I really enjoyed this dip into the makings of some of my favorite music, all while getting to know Loggins a little better. #StillAlright by #KennyLoggins #June2022Release #AudiobookReview #Caddyshack #TopGun #Footloose #bookreview #Bookstagram #Newrelease #ImAlright #ConvictionoftheHeart #logginsandmessina #DangerZone #HouseatPoohCorner #returntopoohscorner #Booksta #instabooks📚
How fitting after the last few weeks
At the age of 49, I am an orphan. In case you missed my post on social last week, my mother passed away at the age of 85. The last year for her was kind of rough in terms of her health. Here's my tribute. #Mom #Mother #Tribute #Eulogy #RIP #ILoveYou
Mom’s journey on this earth ended early this morning. She’s at peace now.
Big day at our house as our son graduated from high school! So proud of this kid. #classof2022 #southwesthighschool #greenbay #myalmamater