Nancy Drew #7 The Clue in the Diary

Did you know that the Nancy Drew books you grew up on were not the same as the ones your mother or grandmother read? Over the years, the first 34 books were rewritten or revised. I grew up with the Revised Texts (RT), so I decided to read the Original Text (OT) and the RT and compare them.

In the OT Clue in the Diary, Great Depression-era Nancy, Bess and George find a woman and child down on their luck with no money and a missing husband, who is supposed to be looking for work. While returning home from a carnival, Nancy and gang come upon a mansion engulfed in flames. Nancy tries to run toward the house to see if anyone needs help, and sees a man dart through the bushes and run off into the woods. But of course, he dropped something: a diary. It is written in Swedish, and even our almost-perfect Nancy does not know the language. As with most Nancy Drew mysteries, the destitute woman and daughter she met earlier are tied to the man who dropped the diary.

Nancy withholds information from the police repeatedly because they are not that good at their job and rush to judgment. ?!!

I grew up on the Revised Texts, so it seems Ned Nickerson was always around. In this, the Original Text Clue in the Diary, we meet Ned for the first time and see Nancy as a somewhat bashful young lady when around Ned. It was nice to read how their relationship started. 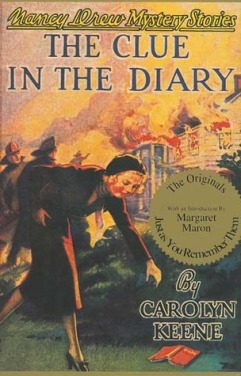 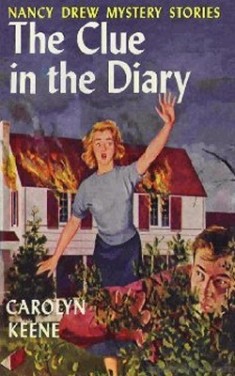 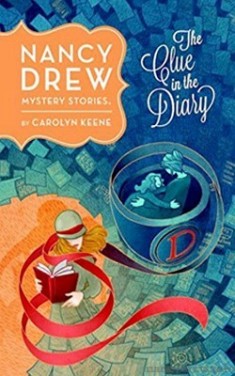 And kudos on the introduction to the Applewood edition. I agree wholeheartedly with Maron–George was who held my interest throughout the series. The short dark hair, the athletic build, the bluntness, the tomboyish-ness, that was me growing up. I’m glad to read someone else who shares my opinion.

One of the troubles of reading the Original Text Nancy Drews and then immediately reading the Revised Text is the threat of boredom because in many cases, it’s the same story, just shortened and cleaned up of stereotyping language. That’s how I felt when I started this RT version of The Clue in the Diary. It was almost identical to the OT, with a few minor revisions to the story. It was when the story diverged from the OT that things really picked up for me.

Every Nancy Drew fan that reads the OT and RT side-by-side says the OT is better, and in some ways yes, but in other ways no. RT Clue in the Diary has much more plausible story. She actually does more investigating instead of just stumbling onto things. Situations that didn’t make sense in the original are changed so that they do make sense to the story. Racial stereotypes are pretty much gone in the RTs, as well. I prefer the RT most of the time, including this story.

Nancy's taking flying lessons and stumbles upon a couple of mysteries at the same time. This book was just weird, and weak in the mystery department. I break down #TheSkyPhantom #NancyDrewMysteries #53 by #CarolynKeene #NancyDrew #SeriesBooks #BookReview #GirlSleuth #GirlDetective #StratemeyerSyndicate #TeenSleuth #Bookstagram #ColdWar #Revolution #Flying #Flyinglessons #Teendetective #Booksta
He wrote the soundtrack to some of the biggest songs of the 1970's & 1980's, and now he's written a book about his life. I really enjoyed this dip into the makings of some of my favorite music, all while getting to know Loggins a little better. #StillAlright by #KennyLoggins #June2022Release #AudiobookReview #Caddyshack #TopGun #Footloose #bookreview #Bookstagram #Newrelease #ImAlright #ConvictionoftheHeart #logginsandmessina #DangerZone #HouseatPoohCorner #returntopoohscorner #Booksta #instabooks📚
How fitting after the last few weeks
At the age of 49, I am an orphan. In case you missed my post on social last week, my mother passed away at the age of 85. The last year for her was kind of rough in terms of her health. Here's my tribute. #Mom #Mother #Tribute #Eulogy #RIP #ILoveYou
Mom’s journey on this earth ended early this morning. She’s at peace now.
Big day at our house as our son graduated from high school! So proud of this kid. #classof2022 #southwesthighschool #greenbay #myalmamater