What on earth is a Wisconsin gal doing reading a biography about the quarterback that was partly responsible for the Green Bay Packers’ only Super Bowl loss? I like football, and I can appreciate a really good athlete.

I’ve always been magnanimous to other teams and players. I attribute it to the fact that I was born on Super Bowl Sunday, 1973. That was the Super Bowl of the undefeated Miami Dolphins. I used to have a Green Bay Packers license plate that said SPRBL 7, which probably confused the heck out of other drivers!

As of 2017’s NFL off-season, Elway held at least 33 Broncos franchise records, including: 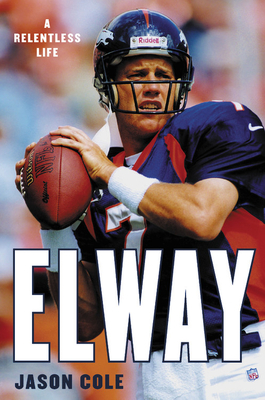 On to the book. Jason Cole had unprecedented access to everyone EXCEPT  John Elway when writing Elway: A Relentless Life  (to be released September 15, 2020). His family provided interviews, his friends, his teammates, his business partners. And maybe that’s why I had problems with the book.

The first several chapters are all about Jack Elway, John’s football coach father. There’s backstory, then there’s backstory.  The reader gets a really good feel for who John Elway’s dad was.  Then there’s even a short chapter on Elway’s mom, Jan.  That chapter felt like it was thrown in there to try and even out the overwhelming praise Cole had for Jack Elway and the way he raised his kids, even though football consumed him so much he wasn’t around much when his kids were growing up.

Then, when John Elway starts playing football, we get a whole chapter on the man who was his high school football coach before actually getting to how Elway performed. Several chapters make up the draft and the deal that traded Elway from the Colts to the Broncos. It involves lots of people with lots of backstory, but I didn’t feel I got a glimpse of who Elway was in all of this, besides the #1 player in the draft.

Almost the whole book is like this.  You’re 40% into it before Elway even gets traded to the Broncos.  Then there’s chapter after chapter on coaches and other important people in Elway’s life of a Bronco. It takes until you’re 70% into the book before you get to Elway’s defining Super Bowls. As painful as it was for a Green Bay Packers fan to read the chapter on Super Bowl XXXII, I thought it was well done, as was the succeeding chapter on Super Bowl XXXIII.

One of the things I like to know about when I read about someone in the public eye is how they are as a human being off the field, with their families.  After Elway retires from the Broncos, there’s a short chapter on the dissolution of his marriage to Janet, and a brief biographical sketch of each of his four kids. Then there’s another brief chapter on meeting and marrying his current wife.

I thought the section on the Arena Football League was pretty good, as you got a feel for Elway’s actions and the work he put in to making a success into his team.  The same can be said about his work as an executive with the Broncos and the moves he made to create another successful team.  But at times, like earlier in the book, Elway is overshadowed by the other people: Tim Tebow, Peyton Manning, etc.

Elway: A Relentless Life  is for diehard Broncos fans, if you want to know everything about the people that surrounded Elway during his climb to the top as a player and as an executive. As for getting to know the man himself, this book is sadly lacking.

Thanks to Net Galley for this Advanced Readers Copy (ARC).

#NetGalley #ARCReview: Castle Shade (Mary Russell and Sherlock Holmes #17) One of my favorite series has a new book coming out and I had the chance to read it! #maryrussell @laurierking #sherlockholmes #mystery #castlebran #bargainsleuth
Music Monday: "I Woke Up in Love This Morning" by David Cassidy and the Partridge Family. Today is David Cassidy's birthday. In memory of him, I'm featuring one of the many songs he sang. Click thorough the link provided to read more and to watch a music video. #davidcassidy #thepartridgefamily #1970smusic #1970stelevision #musicmonday #bargainsleuth #teenidol #Iwokeupinlovethisorning #RIPDavidCassidy #songstagram
I recently listened to a Danielle Steel audiobook. It had been about 30 years since I last tried something by her and was pleasantly surprised, so I thought I'd try another. Blue by Danielle Steel is not your typical Steel romance. There's a love story there, but it's between a broken woman and a 13-year old runaway. #daniellesteel #CatholicChurch #pedophilepriests #humanrightsworker #priestabuse #bookreview #bookstagram #bargainsleuth #audiobook #homelessness #teenagerunaway
The Kennedy Debutante: A Novel by Kerri Maher is the story of Kathleen "Kick" Kennedy, who was said to be John's favorite sibling. The story covers her time in England before WWII and her efforts to return once the family was shipped back to the United States. #kennedys #kathleenkennedy #johnfkennedy #WWII #dukeofdevonshire #kickkennedy #bookreview #bookstagram #bargainsleuth #josephpkennedy #thekennedydebutante #kennedysofmassachusetts #kerriMaher #AmericanAmbassador #WorldWarII
After a year of reading the books, I've got a little Nancy Drew fatigue. I'm up to The Clue of the Leaning Chimney (Nancy Drew Mystery Stories #26). The Original Text was published in 1949. I skimmed the Revised Text, which came out in 1967. #nancydrew #nancydrew90thanniversary #teensleuth #teendetective #seriesbooks #nancydrewmysteries #carolynkeene #bookstagram #bargainsleuth #girlsleuth #girldetective #theclueoftheleaningchimney
Sunday Kindle Deals: I've compiled a list of 20+ books today. Nothing is over $3.99, and some of the books are FREE! #ebooks #freebooks #eastofeden #johnsteinbeck #netflix #thequeensgambit #thekingsjustice #susaneliamacnealbooks #maggiehopemystery #NASA #kindlebooks #cozymystery #bookreview #bargainsleuth